How We Got Our Pensions 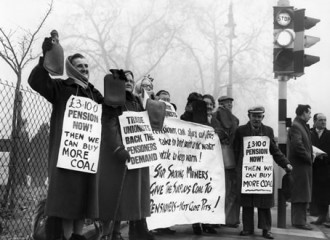 Pensions have come a long way since their genesis back at the turn of the 20th century. They’ve gained notoriety, been put in the political spotlight time and time again, and opened up their doors to a wider audience of beneficiaries. They’ve become fairer and, as a result, more draining economically. They’ve even become an essential part of our economy.

But they haven’t always been this way. In fact, we’ve only actually had our pensions since 1908 (under that official title, at least; there was a similar scheme in the 1670s for retired Navy officers, but it wasn’t called a pension), and back then, it was nothing like it is now.

Way back in 1902, Secretary of the Amalgamated Society of Engineers George Barnes formed a group called the National Committee of Organised Labour of Old Age Pension (that certainly is quite a mouthful). Barnes was a huge advocate of social reform, promoting the redistribution of wealth from the rich to the poor. He was something of a political Robin Hood.

Barnes’ views were shared and publicly endorsed by David Lloyd George, the Chancellor of the Exchequer in the Liberal government. He believed that by guaranteeing an income to the elderly when they were too old to work, he could disestablish what was called ‘The Poor Law’. The Poor Law basically ensured that any working class person that required financial help were to be sent to a workhouse, where they were made to labour every day for next to nothing.

1908 was a big year for social welfare. It saw the dawn of a new Act of Parliament, forming part of the wider social reform of the Liberal Government between 1906-1914.

The first state-issued pension scheme was, frankly, a little harsh on its recipients. The benefits bar was set exceedingly low to deter others from relying on the government for an income in later life. Pensioners could expect a measly 5 shillings a week; that roughly equates to around £16 today.

Married couple weren’t on much more, with 7 shillings 6 pence a week, roughly equating to around £23.

For those who actually pursued a pension from the government, the application process was long and tedious:

If you could be trusted, and if you were virtuous, then you got a pension.

On December 31st 1908, Britain’s first state pension was paid to a total of 596,038 people across the UK. We officially got our state pension scheme, which has been going on something of a roller coaster ride ever since.