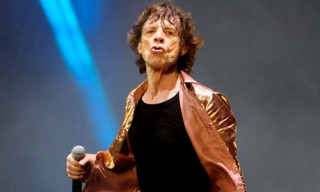 Frontman to one of the greatest bands of all time, icon of the 60’s, defining image of the counter-culture, granddad. All applicable titles for one extraordinary man, Sir Mick Jagger.

With a career that spans six decades Mick Jagger has been one of the enduring icons of British music. As the lead singer of the Rolling Stones, Jagger has been entertaining the public with his on and off stage antics for years.

With no sign of slowing down or even beginning to think about retirement, we’ve taken a look at the career of this musical legend.

Born to a middle class family in July 1943, Mick Jagger found his love of singing at an early age. After reconnecting with former schoolmate Keith Richards as a young man, the pair moved to London and after abandoning plans to move into journalism or politics formed a band and one of the most famous and highly-regarded song writing partnerships of all time.

Jagger has been an influential figure since the debut of the Rolling Stones in the 1960’s. Viewed as more edgy and labelled “troublemakers”, the Rolling Stones stood in stark comparison to the other more clean-cut acts of the early and mid-sixties, most notably a small band from Liverpool called The Beatles.

The bands long standing association with the “Rock and Roll Lifestyle” helped to elevate them rapidly to legendary status whilst others fell into obscurity. Only a handful of bands get to be big but only one band gets to be The Rolling Stones.

The Rolling Stones are known for their gruelling, globe spanning touring schedules, something which hasn’t changed even as the band has aged.

Anyone would expect months of continuous travel and performance to take its toll, but the group keep touring and keep going strong all the while fronted by Sir Mick.

Even now he is described as “sprightly”, a picture of youth due to his animated stage performances despite being 70 years old. Mick Jagger’s iconic pontificating and dancing have been an inspiration to several generations of bands who have gone on to become legends in their own right, but it still somehow feels right that he is still a fixture, still showing them how it‘s done.

At 70 the vast majority of people will be retired or about to retire looking at putting their feet up and making use of their hard earned pension. Like everything else in his life Mick has gone against the grain. Seemingly more content with the life on the road and the roar of the crowd, it’s likely that this tireless dedication to performing was a contributing factor in Mick Jagger’s knighthood in 2003 for services to music.

Over the years Mick has been a tabloid fixture due to his tumultuous relationships and friendships with bandmates. High profile relationships with Jerry Hall and Marianne Faithful being major gossip points in their day.

As time has gone by Sir Mick has shown little sign of slowing down. Something which many attribute to his dedicated meditation and Buddhist practices.

Even into an age where most people would look at retirement or winding down their activities to a more comfortable level, Jagger and the Rolling Stones show little sign of slowing with their newest album being released to commercial acclaim.

With a career that spans albums, tours and films coupled with an almost stubborn refusal to slow down his work rate. It is hard to describe Mick Jagger as anything less than a musical icon, and it is little wonder that he was once described as;

If you were a famous rock star how would you spend your retirement? Let us know in the comments below.